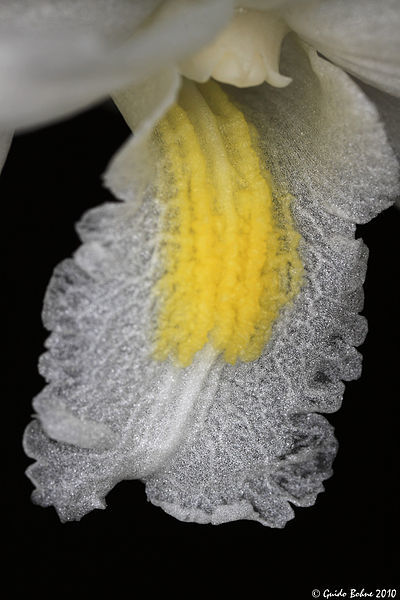 Let me tell you a little about the famous lip of the orchids.

Out of the three petals of an orchid flower, the labellum is the most intriguing and beautiful. It is also known by the name of lip. The characteristic uniqueness of orchids is mainly because of this third petal. You will find the lip arranged at the bottom of the flower. Another way to identify lip is that it is usually different from all other petal and sepals. From the lip position you can also search out the fertile stamen, which generally lies opposite to the lip.

Main function of the lip is to help in pollination. Being present at the bottom, it serves as a base for the pollinators to land on. To attract insects, nature has bestowed the lip with an amazing ability to imitate different objects and is known to take many different shapes and forms.

There are orchids which look like miniature animals, birds, insects and even dancing maidens. The lip accomplishes this by a clever arrangement of colours or by modifying its structure.

The lip can fused together with other petals as well as sepals. By ‘fused with petals’ I mean that in this state it is difficult to identify the three different petals (as they are joined together!). Similarly, fused with sepals would mean that sepals and the lip are joint together to form a single structure.

It can also be free, i.e. you can easily identify sepals or side (lateral) petals from the lip.

In the slipper orchids, like Cypripedium and Paphiopedilum, the lip is modified to form a pouch like structure, which looks like the front portion of a shoe. In these orchids the lateral sepals are fused and the sepal at the top, called the dorsal sepal, is enlarged in size.

In orchids like the Ophrys the lip is colored in various shades of red and is marked with yellow; giving an overall appearance of a smiling man. The other petal and sepals are white to pinkish in color. Orchids belonging to this group are also known as bee orchids, as the lip also resembles an abdomen of a bee.

The lip of the donkey orchid is divided into three parts; this type of lip is called a lobed lip. The lobes or parts are named as the right and the left lobe, or the lateral lobes. The lobe present in the middle can be labelled as mid or middle lobe.

Sometimes lobed lip can be fringed at the tip. These are often called the fringed orchids. Habenaria dentate found in South Asia, is one example of such orchids. You can see the picture of it in Wikipedia.

The lip is sometimes partitioned so that the front portion is slightly raised to from a ridge. As seen in Cymbidium suave. This raise structure acts as a kind of trap to a bee or any other insect which happens to visit the flower. When the trapped insect struggles to escape, the pollen grains get deposited on its back. It is thus forced by the orchid to act as a pollinating agent!

Orchids employ deception to attract the insects and this feature is seen in cross-pollinating orchids. Mimicry is not the only weapon in their arsenal, orchids also use nectar and fragrance to attract the pollinators.