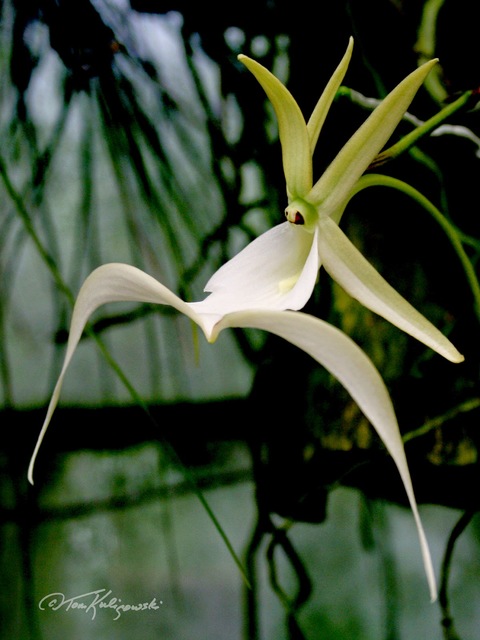 The Ghost Orchid, Into the Slough

I would like to introduce a new guest writer that submitted an article pertaining to Dendrophylax lindenii; commonly referred to as the "Ghost Orchid".  I thank Wendy Mazuk for taking the time to write about her growing interest, obsession and or passion about one of the rarest orchids on earth.  The title image is that of the rare "Ghost Orchid" which was taken in a greenhouse outside of Chicago, Illinois (not an easy task growing in culture).  Four additional images have been added to the post courtesy of Wendy Mazuk. 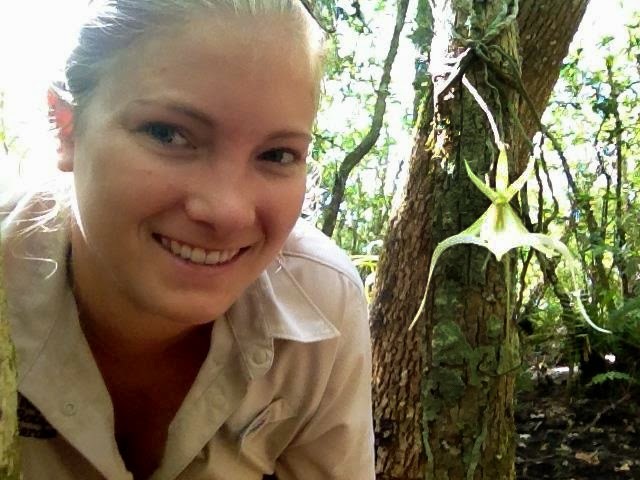 My Adventure into the Florida sloughs began by reading the book "The Orchid Thief", by Susan Orlean.  Growing up in Florida as a frequent visitor to the Everglades, I was always happy to learn more about Native Florida.  Upon learning about this book, I chose it strictly by its name for a class project.  As an active orchid grower I couldn't resist; the name caught my attention.  It was one of the best books I have read and fast-tracked my interest to learn more about this wonderful orchid.

A slough is known as a slow moving, shallow river beneath a protected canopy of bald cypress trees, the water is warmer than normal in the winter and cooler in the summer.

My introduction to the Ghost Orchid began with a variety of research projects at Florida Gulf Coast University.  In my findings i discovered that there had not been much research collected on the Ghost Orchid (Dendrophylax lindenii).  So i set out to meet the head park biologist of Fakahatchee Strand Preserve State Park, Mike Owen.  Excited to learn more I spent the majority of my summers out in the swamps.  The Ghost Orchid is one of the rarest orchids in the world - found only in Cuba and the swamps of the Southwest Florida Everglades; but that's not the only fact that makes them so rare... 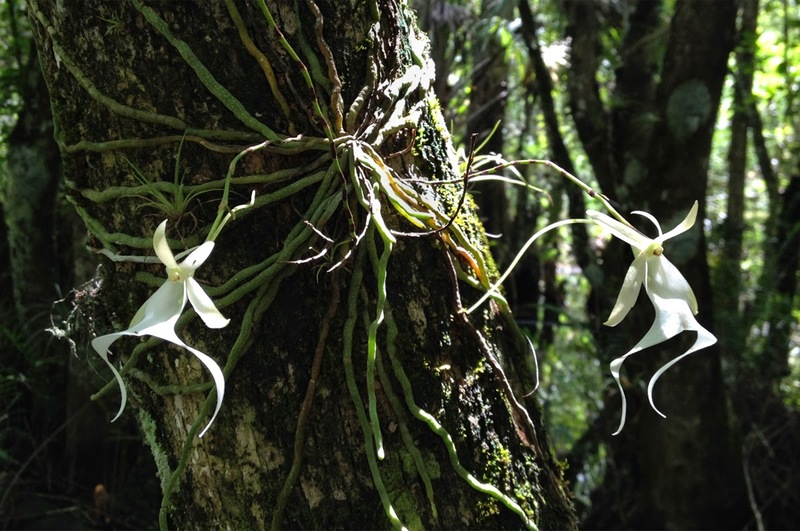 In 1844 Jean Jules Linden saw this orchid for the first time in Cuba.  Jean Jules Linden was a famous orchid hunter traveling around the world collecting orchids for royalty and for study.  Later in the 1890's it was discovered in the Everglades of South Florida.  In 1994 the Ghost Orchid's popularity was more noted by many orchid collectors ad dealers due to poachers being arrested for stealing the Ghost Orchid out of the South Florida swamps.  John Laroche, who was made famous by the book "The Orchid Thief", as well as three Seminole Indians that were arrested for poaching the native Ghost Orchid.  This caused a large controversy between environmentalists, orchid collectors and Native Americans.  Native Americans are able to collect and use a variety of native and endangered species for their cultural traditions.  The problem was that they were taking Laroche to the area where he would steal them to be cloned and sold for profit. 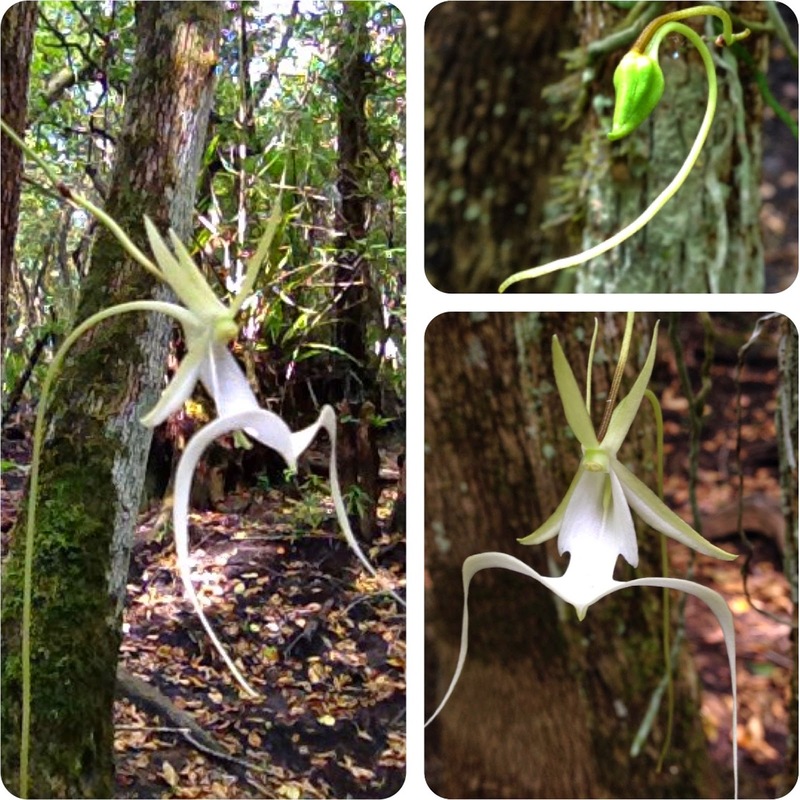 It is believed that this orchid is a distant relative of the African and Indian Ocean genus Angraecum; it seems that orchid seed, blowing like dust, crossed the Atlantic at least once and successfully colonized and evolved in a new habitat.

There is only one known pollinator for this orchid, the giant sphinx moth Cocythus antaeus.Because of this limitation, there is a very low probability of pollination to enable reproduction during a brief 3 - 4 month period of blooming.  Additionally, the Ghost Orchid doesn't always bloom every year - sometimes it skips a year or two.  The giant sphinx moth has a very long proboscis (tongue-like straw).  It is the only moth found in the same area as the Ghost Orchid that would be able to pollinate it.  As the moth receives nectar from the orchid's very long nectar spur, it also receives the pollen attached to it; so when the moth visits the next orchid, the pollen is transferred and pollination should occur.  Because of the low numbers found in Cuba and in South Florida, the short flowering time and only having one species for pollination, the Ghost Orchid incurs reduced opportunities for healthy continuation of its species. 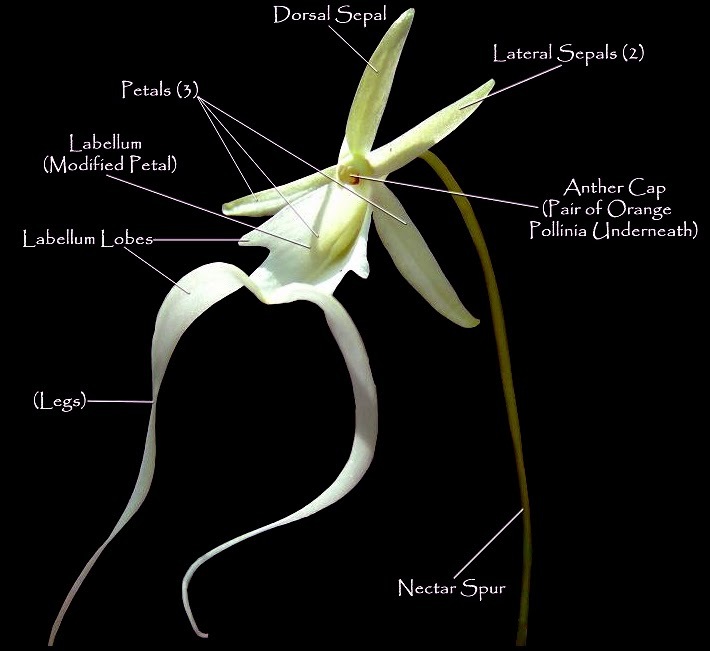 The Ghost Orchid is native to Cuba, South Florida swamps and also some surrounding islands in the Bahamas (the Bahamian variety is believed to be a different species).  The current status of this orchid is protected by the state of Florida under Appendix 2, section 5B-40.0055, the regulated plant index.  It is ridiculous to think people would steal a plant; but this is such a rare orchid that poachers continue to steal these very hard to find orchids, taking them from their native habitat.  These orchids need to be protected so that they can be enjoyed in their natural habitat undisturbed.

To learn more about the Fakahatchee Strand Preserve State Park, click on the link below: