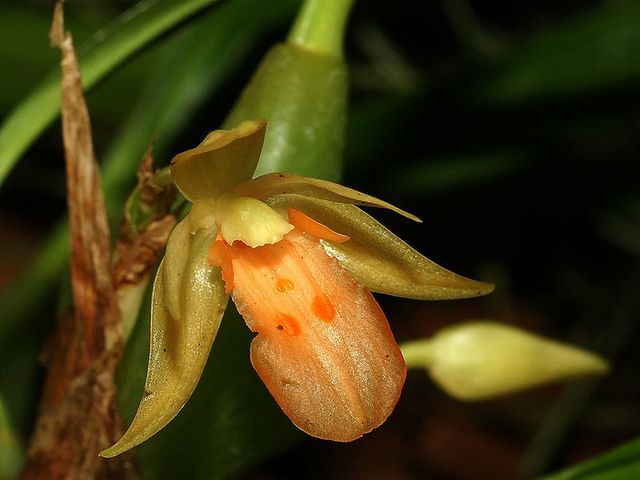 Panisea uniflora is a beautiful miniature orchid and grows in tropical Asia, from India to Vietnam. Besides being an epiphyte, it can also grow as a lithophyte. It can be seen growing both on rocks as well as on tree in company of other orchids, in the shady locales of humid tropical forests.

Physical description: It is a miniature orchid, with each pseudobulb bearing a pair of dark green, and pointed leaves.

Flowering details: The flowers are solitary and long lasting, and appear in April. They are small in size (miniature), delicate, almost translucent and pale ochraceous in colour.

Cultivation:
1. Light: Panisea uniflora grows well in partial to shady sunlight.
2. Watering: It loves high humidity. So water it frequently with proper drainage and dry periods in between.
3. Air circulation: Being an epiphyte, Panisea uniflora needs good air circulation. It will do well if placed outside, taking in consideration the outside temperature, which should warm enough of this tropical orchid.
4. Growth medium: My Panisea is tied with a jute string to a small wooden branch using roughly separated coconut fibres and is doing well. If you want to grow it in a pot, then use coconut chunks mixed with charcoal and brick pieces as the growth medium.
5. It can grow in isolation as well as with other epiphytes (ferns or other orchids). So it can be grown on the ‘orchid tree’. To multiply this orchid is to divide from the rhizome.
6. Fertilization: Fertilization is not necessary. But if you want to be on the safer side, then you can use any general fertilizer being used for epiphytic orchids. Before fertilizing always read the instructions on the fertilizer pack.

Pest and Diseases
If you notice any kind of infection in any of your orchids, immediately separate the infected one from the rest to prevent spread of infection. There is no specific pest or disease which targets only Panisea uniflora. It can be infected by common pests, as well as viral/bacterial or fungal infections. So can be treated accordingly.