When I received the plant that would initially bloom for the first time, it was in a 2 inch (5cm) plastic pot with bark as the medium.  The stem was just over 4 inches (10cm) tall and covered with very green leaf sheaths.  The leaves are about 2 inches (5cm) long and have a very bright green shine to them.  The root system within the growing medium is just about 2mm wide.  The aerial roots are thinner.  Very mature plants have been reported to be near 40 inches (100cm) tall with 3 - 5 branches extending out nearly 20 inches (50cm) out from the main stem.  This however is rare to find in the wild as well as culture. 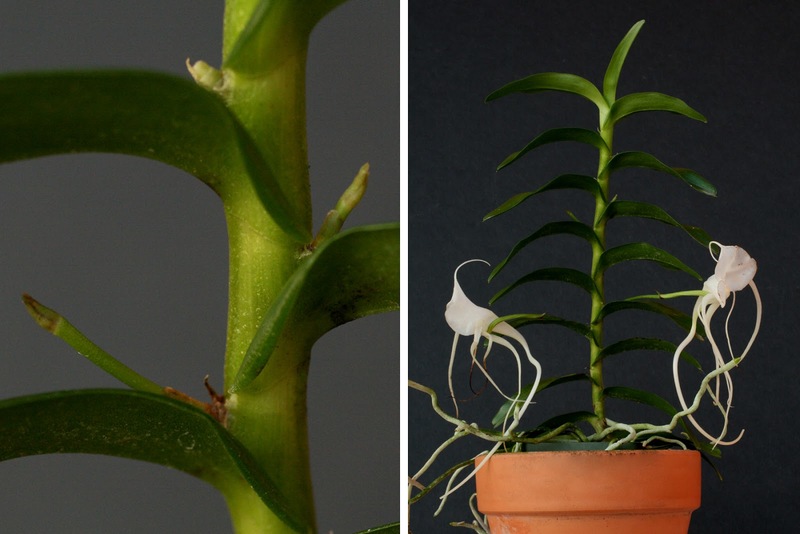 Once the plant was finished blooming, it was placed in a 4 inch (10cm) terracotta pot.  A medium sized non-organic mix (charcoal, sponge rock and perlite) with a small amount (10%) of coconut pieces was used.  The root system within the medium was minimal showing that it had received to much water.  The regiment for watering the plant was every four to five days giving the root system the opportunity to re-establish itself.  Several new aerial roots started to grow within just a week or two giving the plant a sense of new life.

After the plant had been in the pot for six months, it proved to be establishing a strong root system.  With late spring temps now in the mid 80sF (29C-30C), the plant is watered every three days and fertilized once a week.  Keep in mind that most Angraecum seedlings and immature plant's root systems can start to rot rather quickly due to the fact the roots are very thin.

Angcm. germinyanum does have a rest period.  Watering should be reduced and fertilizing stopped for about a three month period.  The plant can be misted between the watering every 5 - 6 days as long as the temps do not drop below 65 F (18C).  Resume a normal watering schedule when you see the growth season begin.  The plant can be re-potted as long as new roots have appeared; paying close attention to not disrupt the root system to harshly.

With the amount of water that the plant is receiving and the fact that it is in a medium shade type of light, it is best that you be sure to treat the plant on a regular schedule of a systemic fungicide.  I use Thyomil and Dithane 45 on an alternating schedule.  Also make sure that the plant is in an area that will get a good air movement over it.

The amount of light that Angcm. germinyanum requires is considered a medium shade, about 1000 - 2000fc (footcandles).  This individual plant is presently receiving an average of 1300fc.  However, it does get direct sunlight for about an hour and a half when the sun first rises.  And absolutely no direct light after that time period.  It has grown about 1 1/2 inches (3.7cm) in the last six months. 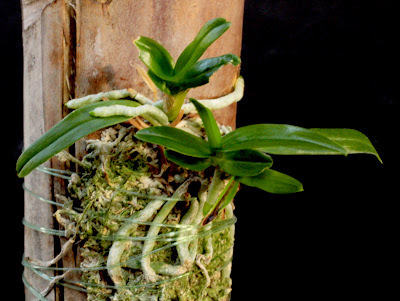 The Angraecum germinyanum seedling above is in its second year of being on the mount.  In the nearly two years, it has barely grown a 1/2 inch (1.3cm).  During the spring and summer growing season, it is watered (saturated) every morning and misted mid-afternoon.  It is my opinion that this seedling should have been kept in the flask longer than it was.  It is however growing a decent root system and as long as it is cared for and watched for any problems, whether those issues be insects (which was a problem the summer prior) or disease, it could eventually bloom; in about three to four years.

As with any orchid or tropical plant, once a plant is established in a given area, it is best to leave it be in that area.  With the proper amount of water, fertilizer and light, it will bloom and become a mature specimen.﻿