Over the last fourteen years, I have had the opportunity to meet numerous people from all parts of the globe that have a passion for Angraecoids.  Meeting some in person and others via the internet.  People such as Joyce Stewart, Johan Hermans and Bob Campbell; authors of "Angraecoid Orchids, Species from the African Region".  Sarah Waddoups, the founder and CEO of the Angraecoid Alliance.  An organization dedicated to the in-situ and ex-situ conservation of Angraecoid genera.  Lisa Hillerman, the youngest daughter of Fred Hillerman, author of "An Introduction to the Cultivated Angraecoid Orchids of Madagascar"; she has shared so much of her father's knowledge and photographs from his trips to Madagascar in the 1970s.  Craig Morell, the horticulturalist from Pinecrest Gardens in Miami, Florida; not only did I spark his interest in Angracoids; but the knowledge I picked up from him is priceless.  Alan Koch and Robert Fuchs, respected growers and accredited American Orchid Society (AOS) judges.  The list goes on and on.
At this time, I'd like to introduce to my readers, Etienne Bosman (I met Etienne via this blog and the Facebook page).  An orchid hobbyist that is very good at what he does and resides in South Africa being surrounded by the Angraecoid genera.  The plants that are sought after for culture in our green houses in just about all corners of the world.  This guest post will hopefully be the first in a series both he and I will be working on throughout the year.  Sharing knowledge of both the natural habitats and cultures from the southern and the northern hemispheres.  Please welcome Etienne Bosman.

"And I have thought, that as orchids are universally acknowledged to reank amongst the most singular and most modified forms in the vegetable kingdom, the 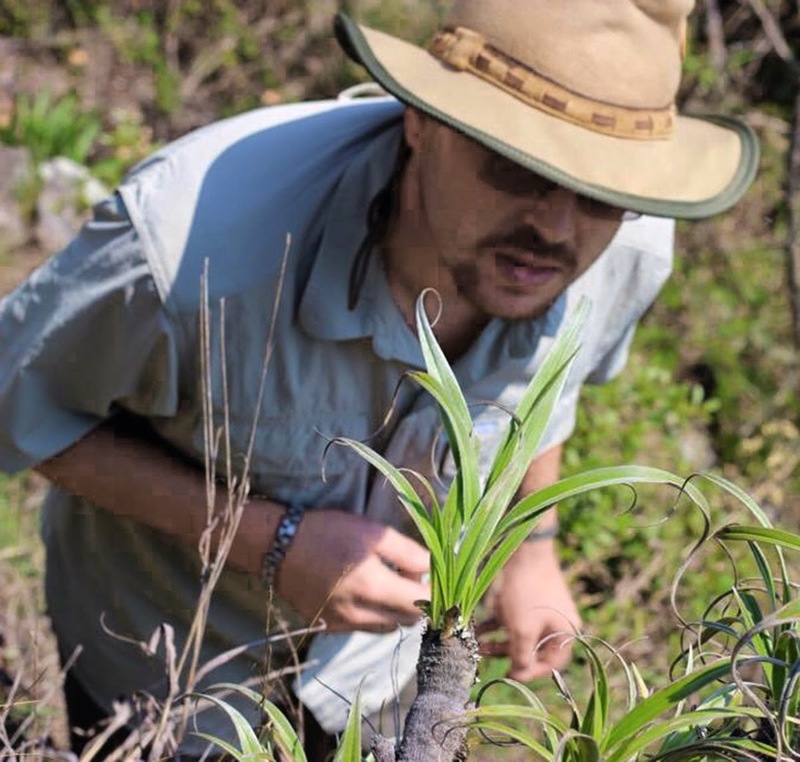 facts to be presently given might lead some observers to look more curiously into the habitats of our several native species."

And so I did, looking more curiously into the habitats of our several native species.  I must say it did take some time to do just that.  Unlike most of the Angraecoid growers around the world; I am fortunate enough to be living in an area that numerous Angraecoids call home.

Just 350 km north from Pretoria in the Limpopo Province, South Africa; lays the Magoebaskloof Pass.  One of the great classic passes of Limpopo and one of the most scenic passes in the country.  This pass takes you from the High Veld (Escarpment) to the Low Veld traveling in a northeastern direction; descending 446 vertical meters from a summit of 1400 m ASL.

Magoebaskloof is part of the Limpopo Mistbelt forest; and very often, due to thick mist, the indigenous forest will not be readily visible while driving through the pass.Mistbelt forests are confined to higher altitude, soll, southern slopes of mountains.  This provides reduced radiation and longer lasting moisture on the forest floor.  These aspects combined with the temperate climate provides ideal growing conditions for orchids. 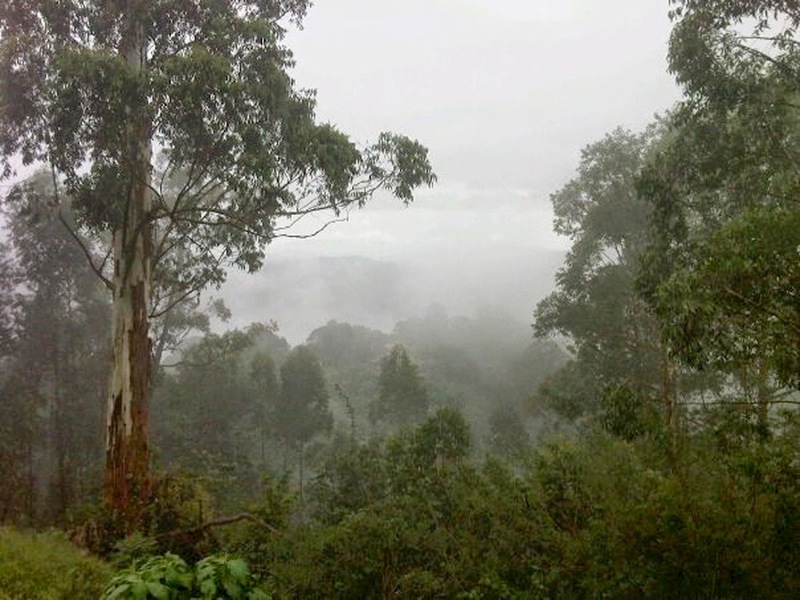 The Limpopo Mistbelt covers a large area with vast geological differences, from the cool escarpment and upper mountain plateau to the warm and humid low veld.  The forest's typical landscape is undulating plateau , steep slopes, gullies and valleys comprising a total area of 19204ha (made up of state forests as well as small forest patches of private land owners).  Most of the annual rainfall varies from 1800mm at higher altitudes to 600mm at lower altitudes.  At altitudes above 1050m where mist is frequent the epiphytes rely on fog and mist which create the high humidity. 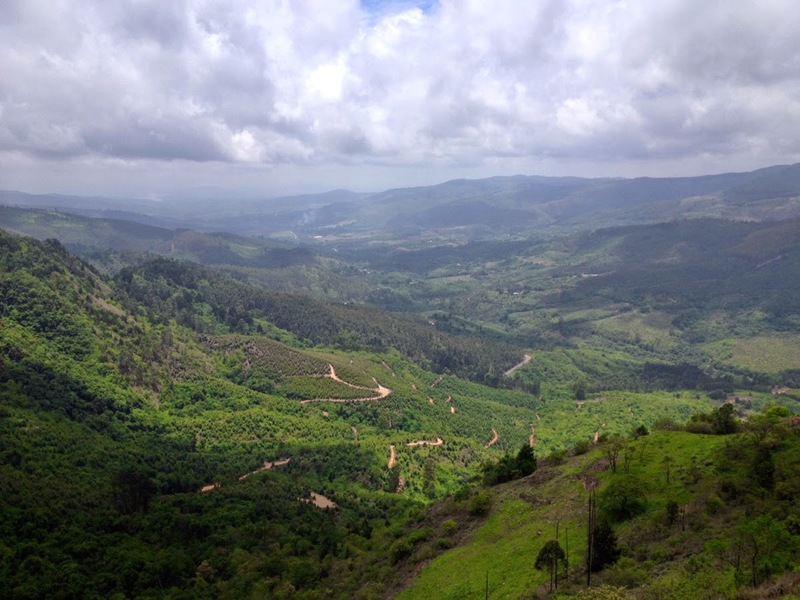 My passion for South African orchids started when I befriended Callie and joined the Wolkberg Orchid Society.  The Wolkberg Orchid Society was established in 1982, with a mere eleven members.  This was the first orchid society  ever to be established north of Pretoria.  Our society is still rather small only reaching 30 members in the last year or so.  A handful, about five, including our president Dr. Sarel Spies (who is a qualified SAOC judge), are indigenous orchid fanatics, explorers and vastly knowledgeable; properties I desire to attain. Our society president regularly encourages us to explore whenever and find whatever we can; which we do on a regular basis.  All of us know the easy to access locations that makes it handy to pop and appreciate the plants when in flower.  But we prefer the lesser known, and for us it is with great excitement to select a forest patch and go exploring and see what we could find.

Our club has discovered species that were unknown to occur in our area, also finding new locations of species thought to be rare.  In my early days I would point at almost anything and shout "ORCHID!" which would draw laughter and jest; but always quickly followed with educated corrections.  It took some time for my eyes to adjust to spotting the orchids I was so eagerly seeking, but I never became discouraged.  At one stage my orchid hunting became so obsessed that my insurance company wanted to increase my insurance rates for risky driving.  We would be driving and I would spot something in my peripheral vision, I would instantly slam on the brakes with little or no regard to what might be coming up from the rear (they have eyes and can see me braking, can't they?).  My partner would always illicit and untrustfully respond, "I'll just be a minute" while fleeing the vehicle with my binoculars and machete; which is always at hand. 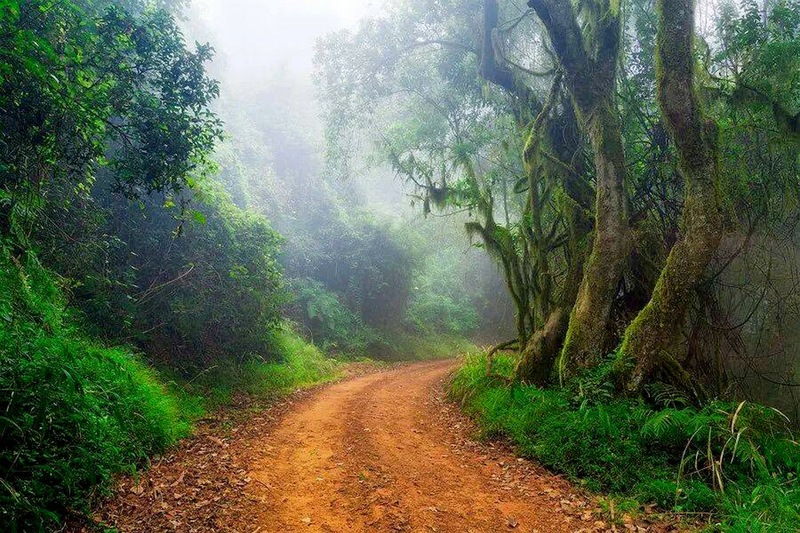 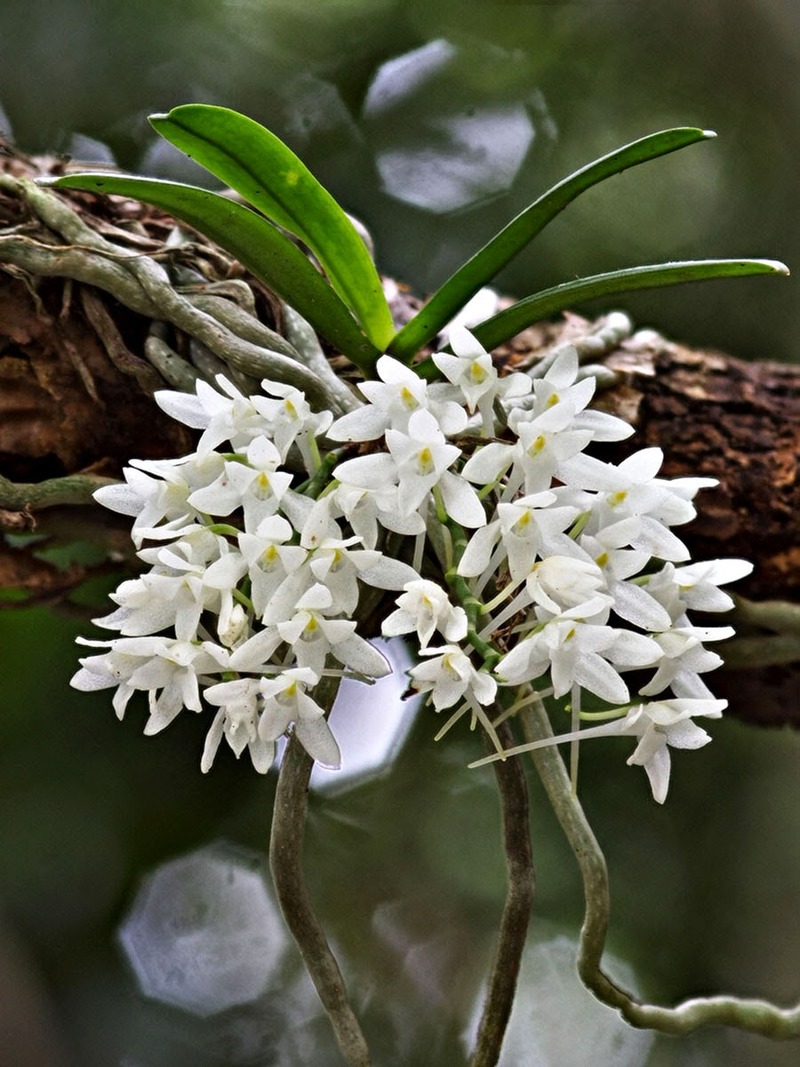 more visible than the plant itself.  When not in flower, some of the mentioned species can be difficult to differentiate from each other.  When found in large numbers together, (or even just a single plant in flower) they still tend to take your breath away.  Angraecum conchiferum tends to grow in clumps on the bigger branches.  When in flower the tiny flowers hang in mid-air away from the plant with the spurs dangling in the breezes.

In the warmer riverine forests and the more humid low veld, Jumellea walleri can be found high-up in the canopies, often forming huge clumps, more than often growing together with Acampe pachyglossa.  At a much lower level you will find Aerangis somalensis and Aerangis mystacidii in deep shade.  The distinction between Aerangis somalensis and Aerangis mystacidii is sometimes debated; but they are regarded as two distinct species.  Aerangis verdickii grows in hot valleys in exposed conditions that can withstand long periods without rain; to which it has adapted through very fleshy leaves and very thick roots.  You will also find Tridactyle tricuspis and Tridactyle bicaudata; Cytorchis arcuata and Cytorchis praetermissa.  Cytorchis arcuata often grows lithophytically as well as an epiphyte; it is more widely distributed and more adaptable; but always in subtropical forest patches.

Lastly, the emblem of the 21st World Orchid Conference held here in South Africa... Angraecum stella africae; which is threatened with extinction in South Africa.  Only two locations are known, both in Limpopo, with 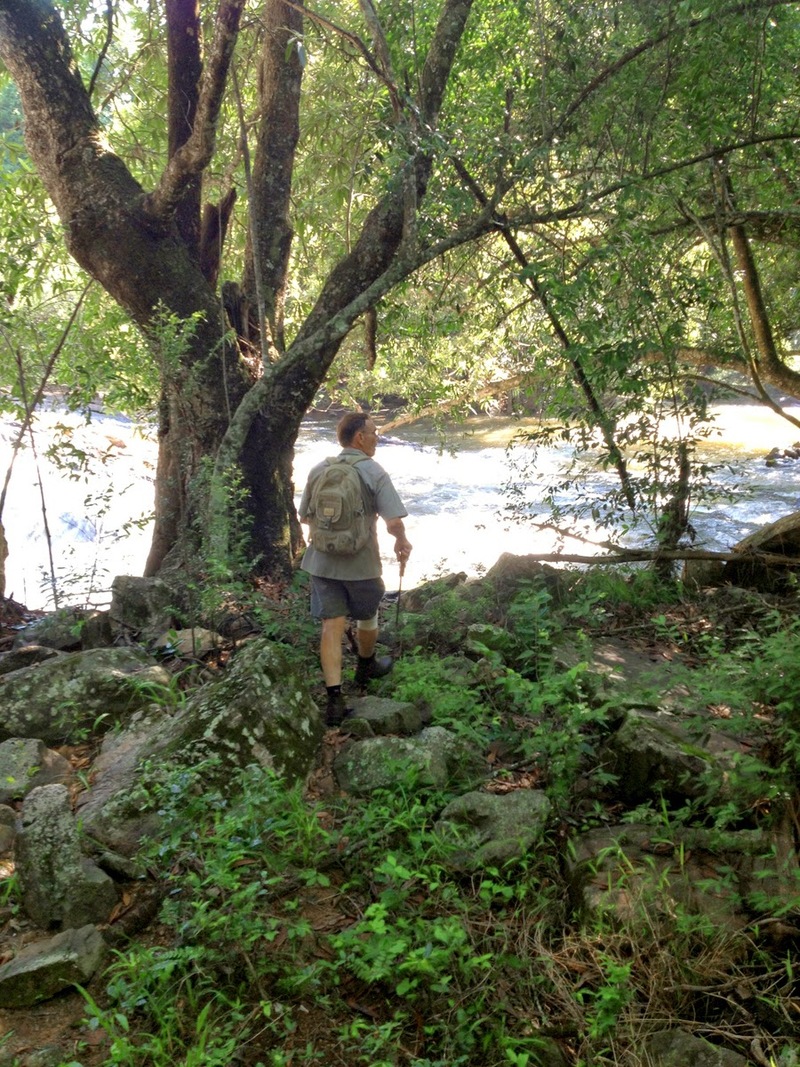 All of the orchids I have mentioned are on the red list.  The red list is the brain-work of the Threatened Species Programme of the South African National Biodiversity Institute (SANBI).  The Threatened Species Programme is one of the continent's largest collaborative conservation projects to date.  South Africa has become the first mega-diverse county to fully assess the status of its "entire" flora.

Over the years we have noticed how locations on private, corporate and state owned properties are getting less and less populated with Angraecoids as well as other orchids due to several serious factors.  Over collection by hobbyist growers and poachers, leaving only the top unreachable branches with mature plants.  Habitat loss due to irreversible conversion of natural vegetation for infrastructure development, urban cultivation and timber plantations.  Invasive alien plants out competing indigenous plant species.  Demographic factors like species that are threatened as a result of high risk population dynamics such as small population size, poor breeding success, male-female ratios and changes in species dynamics indicating species that are threatened as a result of disturbances of the natural interactions of native species such as the loss of pollinators. 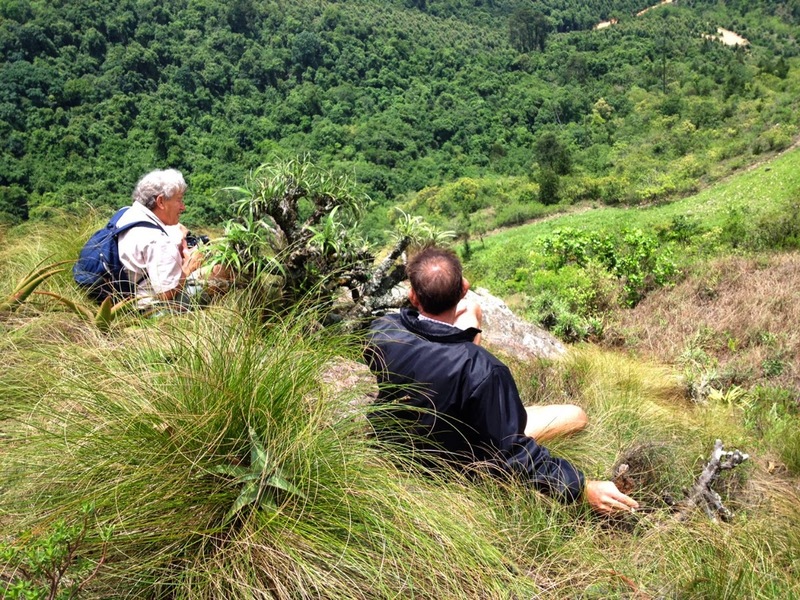 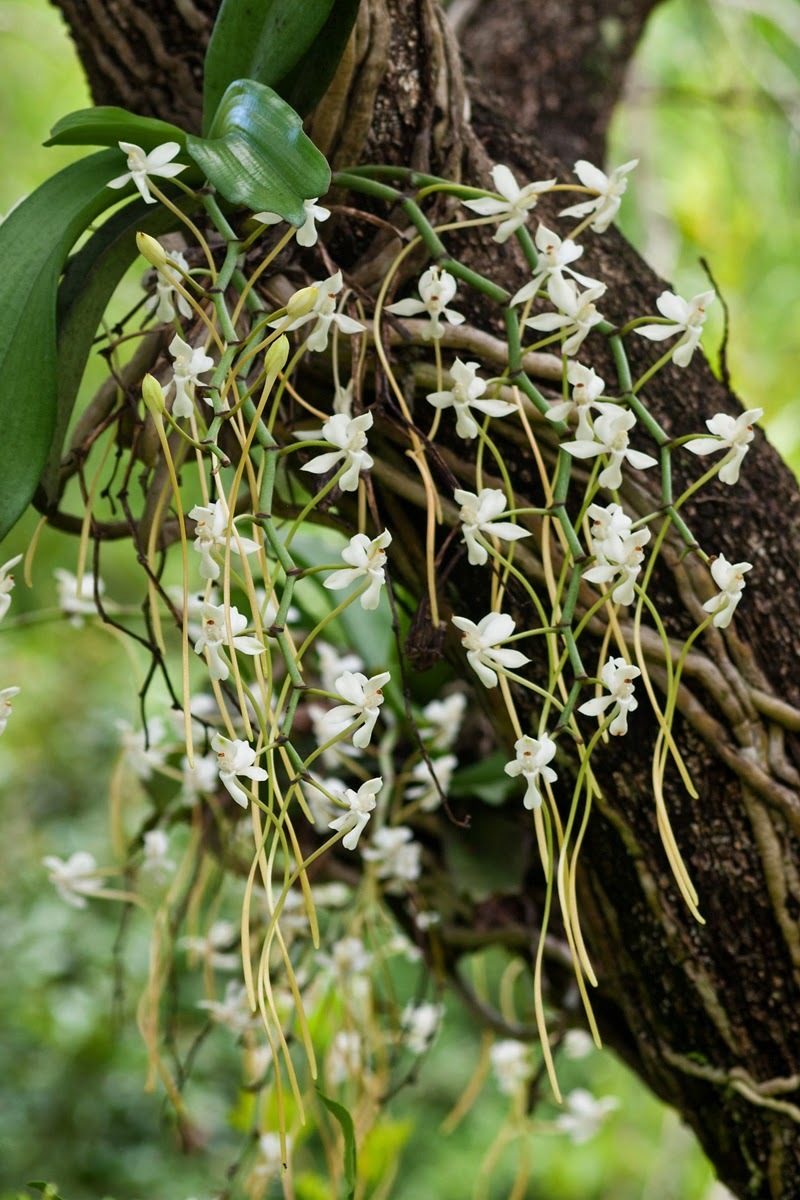 A permit from the Department of Economic Development and the Environment and Tourism offices in the region of concern must be obtained if one wants to collect whole plants or even just a part thereof out of its natural habitat.  Another permit must be obtained from the Department of Agriculture if any virgin land (including forests) are to be transformed.  As far as I am concerned none of these are enforced adequately due to lack of manpower and just because of the huge task involved in doing so.  Some people do hold the opinion that some of the forests are over protected and have lost their vitality; that a large proportion of the trees are just standing there, with no orchid growth and that only the more shade-tolerant species persist and suggests that they need some controlled limited interference to flourish.

There is some confusion amongst land owners and officials of what "virgin land" is and suggest that the policy must be further refined.  This confusion leads to landowners that may become unwilling to collaborate in conservation of indigenous tree species and forest development on their land because of the potential to be constrained in their actions in the future.  The only way to protect the indigenous orchids of South Africa (and the world) is through education.  Educating the public and landowners, with the hopes of grating conservation-conscious and to protect rare plants on their land.  The Botanical Society of South Africa (BotSoc), has championed the cause of wildflower protection and conservation.  Through conservationand educational programmes, projects and initiatives via branches around the country. 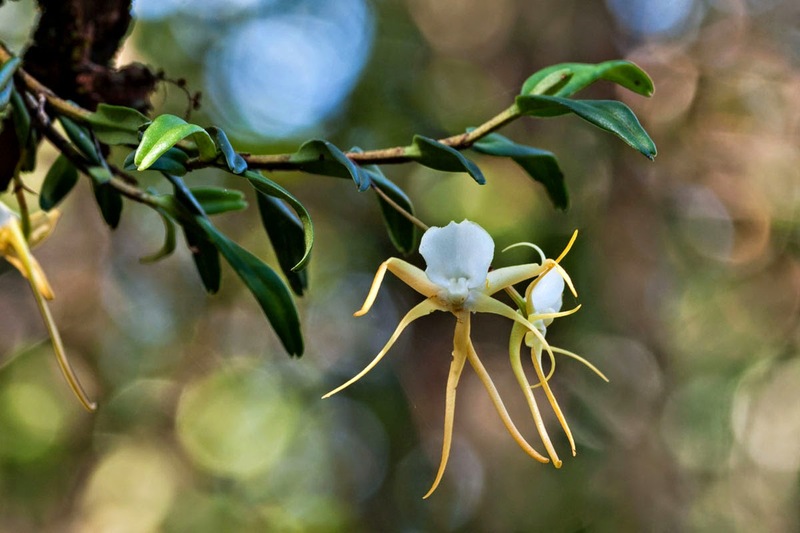 Sadly, many people think that the indigenous orchids would look better in there greenhouse than in nature.  It has happened various times that we take visitors to the locations of rare plants and six months later; upon a return visit to the same location we would find nothing left.  For this reason alone, we are forced to keep these locations a very closely guarded secret.  For me personally, there is nothing as beautiful as to observe the indigenous species in their natural habitat.  I want to share that thought with fellow orchid lovers.