I started growing Angraecum Lemforde White Beauty about seven years ago for the simple fact that I could not get Angcm. magdalenae to bloom.  I had no problem getting Angcm. magdalenae to grow or eventually put out basal keikis.  I could not get them to bloom.  The plant grows in a natural habitat at altitudes of between 4,700 ft. to 6,000 ft. (1,433m-1,830m) and temperatures have nearly a 20 - 25 F (9-11 degrees C) difference during the day compared to night time.  It is my opinion through observation and experience that Angcm. magdalenae is not a heat tolerant orchid (it is usually described as an intermediate to cool growing plant).
I chose Angcm. Lemforde White Beauty because the shape of the flower was so similar to that of Angcm. magdalenae.  Listed by the Royal Horticultural Society (RHS) as the seed parent while Angcm. sesquipedale is listed as the pollen parent.  Angcm. Lemforde White Beauty was registered in 1984 and the originator was Lemfoerder Orchids.

Regarding this post, here lies the issue; I photographed what was labeled as Angcm. Lemforde White Beauty at the Miami International Orchid Show this past fall (2013).  Due to the flower's shape, I was confused as to what the plant really was.  Traits that I had become accustomed to were nowhere to be seen in the flower.  My first thought was that the plant had been labeled incorrectly.  The structure of the plant itself appeared to be that of Angcm. Lemforde White Beauty.  It had closely grown alternating leaves coming from the stem with the bottom third of the stem being thick and bulky.  Leaves were seven to nine inches (20-23cm) in length and up to 3 inches (7cm) wide.  It was suggested that the plant may have been that of Angcm. Crestwood.  That was ruled out because there was no plant structure bearing any resemblance of Crestwood traits an the flower was a very pristine white; absolutely no yellow/green tint in the sepals or the petals (the most notable Angcm. Veitchii trait in the Crestwood hybrid).

After talking to several people about the difference of the two flowers, I looked into the variations that take place in hybridizing.  Once you have a basic understanding of creating a hybrid, the following explanation made the most sense.

I found an article published in the American Orchid Society (AOS) Bulletin, January 1974 issue written by Fred Hillerman.  He clearly states "...Jones and Scully sold seedlings of a cross of Angcm. sesquipedale X Angcm. magdalenae, but I have seen no mention of its flowering."  This seedling cross being sold more than fifteen years before Angraecum Lemforde White Beauty was registered.  The seedling cross (seedling #1528) was confirmed by Robert Scully as being sold in 1968.  He goes on to explain that the seedlings were actually from a flask obtained by Jones and Scully (J&S) from Marcel Lecoufle in 1965.  The small seedlings were reflasked from a single bottle to two bottles that were grown out to a salable size and then were sold as a catalog offering in 1968.  At the time, Marcel Lecoufle was considered a major link to the world of Angraecoid genera.

Nearly twenty years had passed since the initial introduction of the unregistered hybrid between Angcm. sesquipedale and Angcm. magdalenae.  In 1984, the originator, Lemfoerder Orchids, registers the hybrid Angcm Lemforde White Beauty with the RHS.  The parents are officially listed as Angcm. magdalenae as the seed parent crossed with the pollen parent being Angcm. sesquipedale (notice that the parents have been switched from the cross obtained by J&S from Marcel Lecoufle).

When a grower makes a decision to cross certain plants it is not uncommon that the reason(s) is to increase or decrease the size and shape of the flower, change the color(s) of the flower, lengthen the time the flower will stay in bloom or to change the size and shape of the plant itself as well as other traits.  I recently sent an email to Lemfoerder Orchideenzucht hoping that someone could answer one specific question; "...what was the main reason to creating the hybrid Angcm. Lemforde White Beauty?"  I received a response almost immediately from Dr. Peter Reuter regarding the creation of the hybrid.  He states that the main reason was to decrease the plant size of Angcm. sesquipedale; which was achieved.

Dr. Reuter also added that the results would be different depending on the quality of plants being used in the hybridizing.  As an example switching the pod parent and the seed parent would change the overall results (I'll address this issue in a moment).  He also wrote that Angcm. bosseri systematically is the same as Angcm. sesquipedale and was used which produced additional variations.

In 1986, Fred Hillerman wrote in his book (An Introduction to the Cultivated Angraecoid Orchids of Madagascar, pg. 216); he states that he "...had not yet seen the plant and that it should have been crossed years ago.  That it should also avoid the twist problem suffered by Veitchii type crosses.  Magdalenae will probably greatly reduce the size of the sesquipedale plant and also result in a larger flower."  It is believed that seedlings were available through Angraecum House (Fred Hillerman's business) at the time his book was published.  A project he had started a couple of years prior.

Upon the release of the Angraecum House 1989 price list/catalog, Fred again mentions Angcm. Lemforde White Beauty.  Listed on pg. 4 of the price list, "...beat us to the punch here but we think our 'Star of Malagasy' FCC X to the best magdalenae we have will give us a real winner.  Our first one has flowered and it;s everything we could have wished for."  I have had conversations with Lisa Hillerman (Fred's youngest daughter) and she remembers her dad crossing Angcm. magdalenae with Angcm. sesquipedale and wanting to create a larger magdalenae type flower yet smaller than the sesquipedale.  The flower type that I have bloomed now for more than six years.

What I have tried to do here is to show that several people in different parts of the world were hybridizing Angcm. magdalenae and Angcm. sesquipedale to achieve a specific goal.  Each grower according to their own results were successful in their attempts.  Imagine hundreds of offspring from a single cross.  Not all of those plants will appear similar.  Some will carry the traits of the seed parent while others the pollen parent.  With a large portion carrying traits of both parents.

The illustration below should give you a better understanding as to the distribution of the various flower types and the explanation I was looking for regarding the extreme difference in flower types.

The white star represents the flower that bloomed in 2008.  Flower shape was similar to that of the seed parent and a larger size.  The sepals and petals were thick at the base and came to a point with a slight curl.  The black star represents the flower from 2013.  The flower shape was very close to the pollen parent yet still had a slight curl rather than reflex to the sepals and petals.  Looking at the illustration, you can now imagine the room for the various offspring and where that offspring may come from regarding the location on the table and the traits the offspring will carry.

Switching the seed and pollen parents around may change the traits of some of the individual offspring is considered by some as speculative.  There is a lot of room on the table and many of those results would be similar as though they haven't traded ends of the table.  One last note, no matter what the seed or the pollen parent is, the hybrid grex name would remain the same. 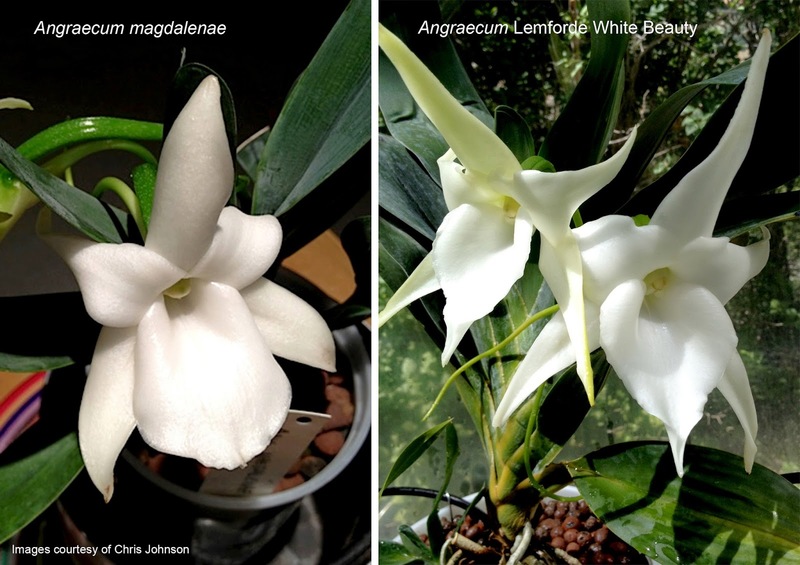 [UPDATE Oct. 27, 2014: I recently rec'd several photographs of an Angcm. Lemforde White Beauty which bloomed for Dr. Chris Johnson, one of the blog's readers. As can be seen in the image above, the form of the flower resembles traits more familiar with Angcm. magdalenae than Angcm. sesquipedale.  Comparing Chris's bloom to mine shows that both plants came from a section of a table closer to Angcm. magdalenae.]