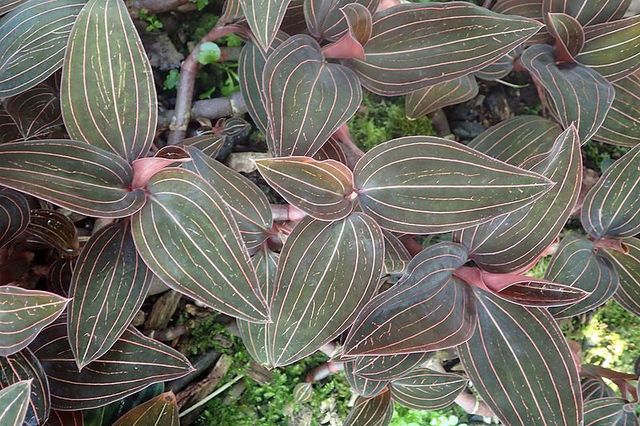 Uniqueness is the forte of orchid flowers, which is why orchids are world famous. But let me tell you that orchids have assets other than their flowers.

Some of them have specialised aerial roots. We have orchids with bulbous structures on stems or roots; in terrestrial orchids the bulbs are underground (also called rhizomes), while in some epiphytic orchids stems turn bulbous. Some orchids have unique morphological structures like Papillionanthe teres, also called the butterfly orchid because of butterfly-like flowers, which has no leaves. It is the stem which is green.

Mother Nature’s beautiful handiwork can be seen all around us, but looking at orchid leaves, it becomes obvious that nature has been partial here. Orchid foliage comes in different phyllotaxis, leaf orientation and venations. There are many orchids which have intricately decorated leaves, so much so that they can be grown for their foliage alone like some other houseplants. You don’t need to wait for the plant to flower; they are a sight for sore eyes even in vegetative stage.

Mottled or variegated leaves are seen in many orchids. Psychopsis has colourful leaves, which are mottled with brownish red on the lower side (abaxial side). Oncidium mendenhall has bright green leaves which are mottled in deep red. The moth orchid (Phalaenopsis), a monopodial has bright green beautifully designed foliage. Orchids like the Jewel Orchid, (Ludisia discolour) known for brightly coloured beautifully shaped flowers, also has broad dark green coloured variegated leaves decorated with white veins. Same is the case with Lady Slipper Orchids, which have uniquely shaped flowers; their foliage too can put any other houseplant plant to shame. Goodyera pubescens is gifted with dark green leaves, variegated with white lines (veins) and so is Paphiopedilum concolor. In Sarcoglottis sceptrodes (aka Green Dragon Orchid) broad leaves are variegated with white lines, presenting a picture of parallel venation.

Fan-shaped arrangement of leaves is seen in orchids like Aerides and Vanda. Opposite arrangement of leaves is observed in orchids, like the erect Reed Stem Epidendrums, which have thick fleshy bright green leaves with long internodes. If you are looking for a densely leaved orchid, then Phaius tankervilleae (a terrestrial) is the plant for you and so are the Cymbidiums, which are mostly epiphytes. Broad pleated leaves are seen in orchids like Malaxis. In Spiranthes bracteosa the leaves are wide pleated.

I hope now you will buy orchids not just for their flowers, but also for their foliage.