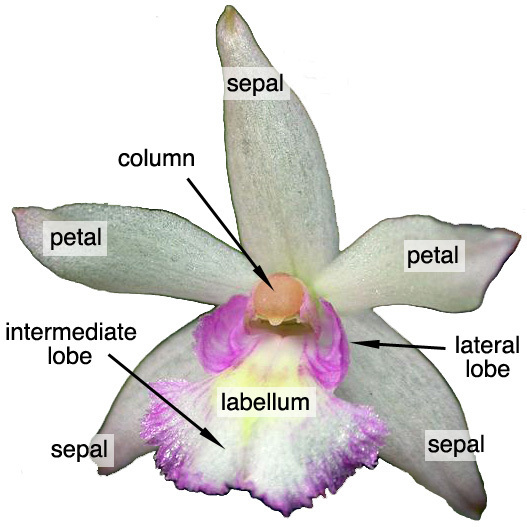 What is the most awesome thing about the orchids? For me, it is their flowers and the most eye-catching part of the flowers is their perianth. The perianth is made up of two parts: Calyx and Corolla. Calyx of an orchid flower consists of three sepals, while the whorl of three petals forms the corolla. Some times the sepals and petals are also called tepals.

Sepals are leaf like and are mostly green in colour, but can have colours other than green also. You might find them either free or fused together with each other or with the column (reproductive part of the flower). Two of the sepals are arranged laterally (on the sides) and go by the name of lateral sepals. The third sepal, called the dorsal sepal, is present at the top of the flower and is different from the two lateral sepals.

Generally speaking, sepals are less attractive or colourful than petals. However,some orchids have bigger and more colourful sepals; like the Central or South American orchids Neomoorea irrorata and Dracula simia (monkey orchid), or the Philippines orchid Euanthe sanderiana. In Neomoorea irrorata, the sepals are larger and are purple from tip to the mid portion, while the petals have bright purple strikes on a white background. In Dracula simian the sepals are more prominent and have long spur on each sepal.

Unlike sepals, petals lack stomata,so are less leaf like. Stomata are specialised cells present on leaves.

Out of the three petals two are arranged on the sides, called the lateral petals. These are placed between the dorsal and the lateral sepals. The third petal is most interesting, called the labellum or lip. In a number of orchids, the lip takes on bizarre shapes. The lady slipper orchid (Paphiopedilum) found in the South Asian region has a slipper shaped lip. Sometimes the lip maybe lobed or fringed, but the list does not end here. There are many more different shapes observed in orchids. All this variation is for either attracting or tricking the pollinator to carry the pollen.

Do you know any orchid species which look like some other organisms? There are numerous such orchids found all over the world. It is mostly the sepals or petals of orchid flowers, which through their patterns, arrangements or colour combinations, put forward a whole new world of imitation. Like the Donkey orchid, (Diuris) occurring on the Australia and the neighbouring islands, has the two lateral petals shaped like the ears of a donkey. Then there is the Monkey orchid, its petals and the column are patterned to form a monkey’s face. There a many other such interesting examples.

Many times the perianth also has nectaries filled with nectar, near the base where it joins the flower stalk.