One of the odd traits of the Angcm. Veitchii was the fact that the flower always wants to open parallel to the ground.  In other words it wants to face down with the spur/nectary following suit, staying parallel.  That issue is actually called “twisty flower”.  The lip of the Angcm. sesquipedale is pointing down and slightly out while the lip of the Angcm. eburneum is upright appearing as a hood rather than a lip of the flower.  Angcm. Veitchii seems to open on its own terms.  Not following either of the parents traits.

Cross the Angcm. Veitchii with Angcm. sesquipedale and it now opens with the traits of Angcm. sesquipedale.  The lip is now down and slightly out in the new hybrid Angcm. Crestwood.  It  looks very near an Angcm. sesquipedale; not as large but with the colors nearer the Angcm Veitchii, A white lip, with a slight green throat and white stripe down the center.  While the sepals and petals are slightly green in cast.  The two petals of the Angcm. Crestwood do not retract as much as they do in Angcm.sesquipedale.  The plant has bloomed in late spring through late summer; even into early fall.  The flowers will last up to four weeks if not in severe weather conditions. 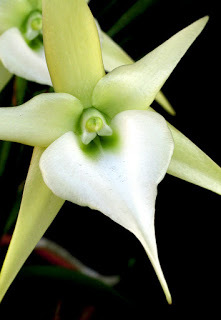 Regarding culture; Angcm. Crestwood’s family tree contains two of the largest Angraecum plants that exist.  Keeping this in mind, it is best to pot/basket the Angcm. Crestwood in something large enough so that re-potting won’t be necessary every couple of years.  It will not get near as tall as it's lineage does; however it will not be setting on your window sill either.  It can reach in excess of 24 - 30 inches (75 - 90cm) and after five years or so have numerous kekeis or secondary plants from the main.
Use a large medium of charcoal, aliflore, perlite and some lava rock.  The larger medium will give the plant ample space to grow its roots, plenty of drainage and air to let the root system breath.  In warmer months, water the plant every 2 – 3 days, trying not to get water on the leaves where it could sit in the leaves against the stem eventually causing stem rot.  Once cooler weather arrives, watering can be cut back to every 3 - 4 days.  If you notice any of the exposed root system starting to wrinkle, increase your watering habits.  I fertilize the plants every week year round (because of my sub-tropical climate here in South Florida) with a balanced 20-20-20 fertilizer.
As the plant gains height, aerial roots will start to appear at the base of the plant.  The taller the plant grows more roots can eventually grow.  Do not damage these roots.  As with so many Angraecums, mess with the roots and the plant will go dormant and not flower for several years.
When using a systemic  fungicide, it is best to spray the entire plant; especially the base or bottom of the leaves.  Make sure to allow the fungicide to reach the root system within  the pot/basket also.  If issues regarding fungus does appear, use a topical fungicide as needed until it is time to use the systemic mixture.
Angraecum Crestwood does very well with bright, indirect sunlight.  My plants get a fair amount of 50% spackled light a couple hours a day.  The 20 inch (50cm) or so length leaves are broad and can be burned by direct sunlight.
Angcm. Crestwood can be grown indoors in a large pot sitting on a table near bright light.  Do try and place the plant outdoors during warm weather.  It will appreciate the breeze.  Once temps reach an average night range of 55 degrees or below, it is time to move the plant into warmer surroundings.