As I have stated in many of the posts in this blog, growing orchids is one variable after another.  What works for one may not work for another, do your research and use someone elses culture information as a starting point for your own.  I have asked two contributors of past articles published in the Angraecums blog to submit an image or two along with the data regarding their Aergs. Elro's culture.  You will see three different variables yet all successful in blooming Aerangis Elro. 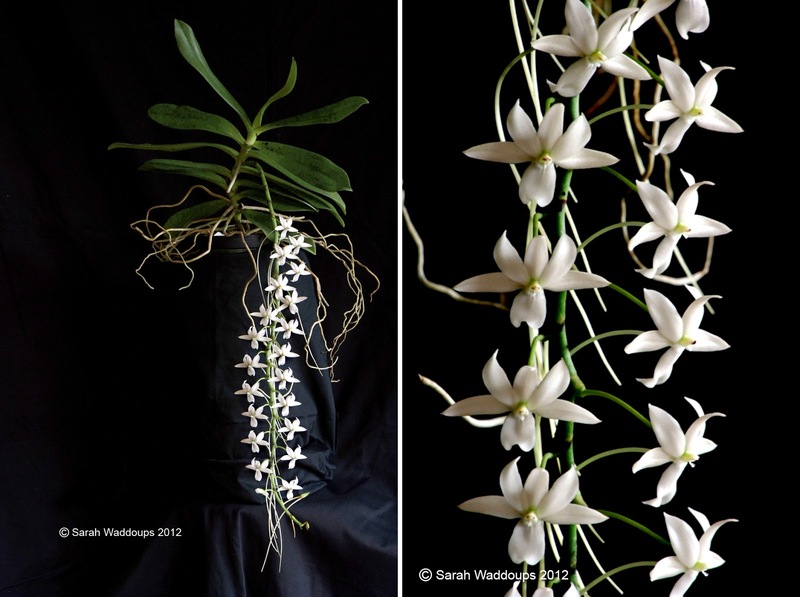 Sarah Waddoups, the founder of the Angraecoid Alliance wrote an article back in February of 2012 introducing her organization.  The alliance concentrates on in-situ and ex-situ conservation.  She is also a phenomenal grower with an emphasis on various Angraecoids.  She is presently growing two Aerangis Elro, images of one them shown above.

She grows both of her plants in wood baskets.  The first is a 12 inch (30cm) shallow basket in which she has placed a small amount of moss tucked into it. "It is hardly full of moss".  The second is a 6 inch (15cm) wood Vanda basket in which she has placed some large bark chunks and coconut coir.  She placed both plants into the wood baskets during the spring so that they wood readily grow throughout the summer.  Both plants attached securely within a few months.  She found that the baskets allow the plants to become somewhat pendant which allows the inflorescence to hang down for a nice presentation of the flowers.

The plants are placed in the same area that the vandas and large angraecums grow.  they are protected from the late afternoon sun by being in the shadows of the larger plants.  The small green house where the plants are grown is opened during the warm summer months and the plants watered every day.  Winter can bring temperatures into the teens and single digits.  The cold weather temperature is maintained at a constant 58 degrees F (14.5 C) while the greenhouse is all closed up.  The plants are watered sparingly throughout the winter.  The plants have done very well over the last couple of years being in their location and do bloom regularly in early summer. 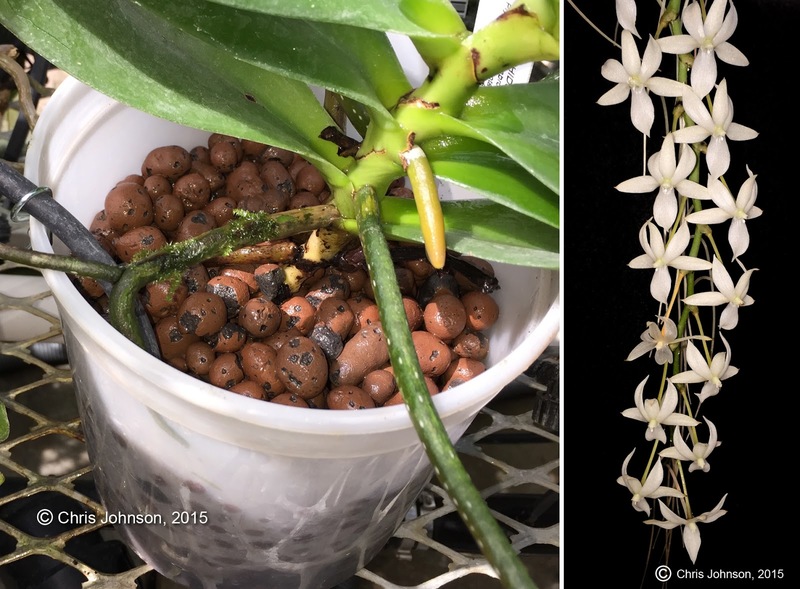 Aerangis Elro being grown semi-hydroponically, bottom half of an inflorescence in bloom.

Dr. Chris Johnson, a professor at the University of Utah travels extensively.  It was important to find a way to keep his collection alive while he was on the road.  After doing research and experimenting with a couple of plants, he started using semi-hydroponics to care for his collection.  Aergs. Elro has grown very well using this technique.

The plant is in a 6 inch (15cm) plastic pot.  Holes are drilled about 1 - 1.5 inches (3-4cm) from the bottom of the pot (this allows water to sit in the bottom of the pot).  The summer temperatures in his greenhouse range 60 - 85 degrees F (16-29.5 C) while winter temperatures range 55 - 75 degrees F (13-24 C).  The plants are watered every other day during the summer and cut back during the colder months to every three to four days.  The water running through the greenhouse is reverse osmosis water and the fertilizer (MSU) is designed for RO water.  He uses a kelp supplement as well as probiotics.

The amount of light varies depending on the seasonal position of the sun.  It is considered a medium bright light.

Sarah and Chris are growing their Aergs. Elro in controlled greenhouses in two different areas of the United States that have very distinctive seasons.  I am growing in a very sub-tropical/tropical area of South Florida.  This past summer started in mid spring (April) and is just now looking to milder temperatures (October).  Growing in an open air arbor has its advantages; such as steady air movement and Mother Nature's elixir, rain!

Two of the plants are in 6 inch (15cm) teak wood baskets.  There is a non-organic medium (charcoal, clay pellets and lava rock) in each of the two baskets.  Allowing for fast drainage, air movement and ample room for the root system to develop.  The third plant is in a 6 inch (15cm) clay pot; one with numerous 1 inch (2.75cm) holes all the way around it (allowing for the same attributes as the wood baskets).

The two plants in wood baskets receive about two and a half hours of early morning sunlight.  After that point, they receive about 3,000 foot-candles (diffused light) for the remainder of the day.  The third plant (in the clay pot) receives about 2,500 foot-candles all day.  All three plants have bloomed in their respective areas.

One thing that I have noticed with Aergs. Elro, is the length of time that an inflorescence starts until the time the buds actually open.  All three of my plants have taken in excess of twelve months, tow of them nearly fourteen months to being in full bloom.  I grow and have bloomed both of the parents; Aergs. ellisii (about ten months) and Aergs. modesta (about six months), neither of them taking as long as their offspring.

Three different growers from three different areas of the country.  All three growing Aerangis Elro using various orchid cultures.  Yet the plants all bloom late spring into early summer.  Use this information as starting points for your plants.  If you have any questions, never hesitate to ask!