Posted by Tom Kuligowski about 5 years ago.

Eurychone rothschildiana was formerly know as Angraecum rothschildiana (still considered the synonym).  The plant originates in Tropical West Africa and east to Uganda and Zaire.  Commonly found near small amounts of moving water and at elevations up to 3900 feet (1200m) in evergreen forests. 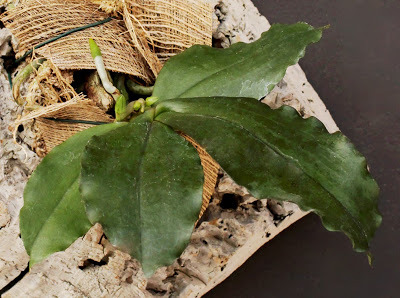 The plant pictured above is an older seedling that is in bud for the first time.  Having a group of three seedlings, two were mounted to rough cork slabs (average size about 6 x 4 inches (15x10cm) in height and width and one was potted in a three inch (8cm) clay pot.  Those mounted to the cork slabs were laid on a loose and thin layer of moss and covered by small pcs. of coconut tree fiber to protect the outer most roots.  The sole plant that was potted is in a mostly non-organic mix with about a 10% amount of medium coconut pieces.  The entire mix is medium in size for fast drainage letting the root system partially dry after watering.

Eurychone rothschildiana is a compact plant that will have a short monopodial stem.  Specimen plants will rarely have a stem reaching 4 inches (10cm).  There can be anywhere from 3 to 8 broad egg shaped leaves that are up to 8 inches (20cm) long and 2.8 inches (7cm) wide.  As with all Angraecoids, the leaves are distichously placed along the stem.  They have a leathery substance and range from a medium to dark green.  The roots are .1 to .2 inches (.3-.4cm) thick.

Depending on the climate in which you are growing Echn. rothschildiana; special attention should be made to the temperatures that the plants are exposed to.  In its natural habitat, the warmest daytime temps average only 81 degrees F (27 degrees C) while in cooler months the average daytime temperature is 71 degrees F (22 degrees C).  This plant should do well in temperate climates within greenhouses that can keep this range along with a relative humidity range of 71% - 84% year round with the higher humidity levels being during the summer months.  Here in sub-tropical South Florida, while plants are grown in open aired greenhouses or arbors, it is important to keep the plants cooler during the extreme warm months of late spring into early fall (almost a six month period of temperatures 10 - 15 degrees F (8 degrees C) higher than that of the plants natural habitat.  This can be accomplished with a constant strong air movement. 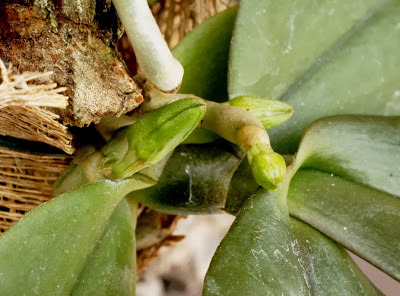 I use a standard 20-20-20 fertilizer every 7 days during the active growing season while backing off to every three weeks for the two month rest period.  A systemic fungicide such as Thyomil is used to treat the entire plant as well as the root system and is switched to Dithane 45 every third month to prevent a resistance build up.  There is always the possibility of minor issues arising so a quart spray bottle with Physan 20 is kept on hand for spot problems.  Keeping a constant air flow also helps prevent serious problems from developing with fungus.

The amount of light that Echn. rothschildiana is given ranges from 1000fc - 1800fc.  Both of the mounted plants are in an area that is actually a bit lower.  They receive absolutely NO direct sunlight during any part of the day; in other words they are in what I consider a low Phalaenopsis type of light.

Eurychone rothschildiana will bloom here in the northern hemisphere throughout most of the year.  It is most likely to bloom in July and least likely to in the cooler winter months.  Mature plants can bloom at any point though.  The inflorescence is pendant like and will range in length from 1.2 - 3.5 inches (3-9cm) and can carry 3 - 6 flowers.  Mature specimen plants have been know to have as many as a dozen blooms.  The blooms are fragrant and have white to light green sepals and petals with the lip being white edges turning to green and then a dark maroon or brown throat.  The flowers average just under 1.25 inches (3cm) wide by 1 inch (2.5cm) high.  The lip can be 1.1 inches (2.7cm) long by .8 - 1.0 inches (2-2.5cm) wide.  It is very concave and scalloped around its edges.  The spur is narrow in the middle and swells at the tip; its length is .8 - 1.0 inches (2-2.5cm) long.

As mentioned earlier in this post, Echn. rothschildiana is a compact plant.  Potted or mounted, it will do well in a sub-tropical climate as well as the colder climates in the northern hemisphere.  Be well aware of the fact that it will freeze if placed to close to a window during harsh winters.

There is one oddity about this plant you should realize.  It is known to be short lived.  A healthy mature plant can die suddenly without warning.  I have not experienced this issue myself; but have had several discussions with Craig Morell, the horticulturalist at Pinecrest Gardens in Miami, Florida.  He has had several well cared for mature specimens die suddenly for no apparent reason.

One last note: Eurychone rothschildiana has been crossed with Aerangis and Angraecums to create at least three hybrids to date; Euryangis Victoria Nile, Eurygraecum Lydia and Eurygraecum Walnut Valley.  The last two being created by Fred Hillerman.