Angraecum distichum, native to Central Africa, particularly Cameroon, Gabon and Uganda.  As it's name suggests, it is also known as the Two Rowed Angraecum for the bright green, triangular and succulent type leaves.  Angraecum distichum is very often grown for the foliage alone.  Flowers being a secondary thought. 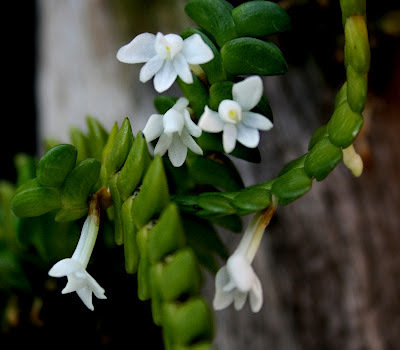 As with any other angraecum, give the plant what it needs and it will flourish.  It is an easy one to grow but very slow growing.  And as it has been written in the past, DON'T MESS with the roots.

Because of the way it grows, distichum will grow into clumps.  As the years pass by, the clump will continue to expand.  Mature plants have stems that can reach to 8 inches (20cm) but most will top out at about 6 inches (15cm).  From the end of one leaf across the stem to the end of the leaf on the opposite side averages about 1 inch (2.5cm).  It is common to see keikis develop at the base of the plant as well as branching from various sections of the overall length as seen in the image below.

Angraecum distichum can be grown either in a small pot or mounted to wood, cork or a tree fir material.  If grown in a pot, be sure to use a medium that will last a while.  As stated earlier, the roots do not like being disturbed.  A fine mix of perlite, charcoal, small pieces of coconut and some moss work well.  If mounted, use moss around the base of the plant engulfing the roots so that they have access to the moisture that the moss holds after watering. 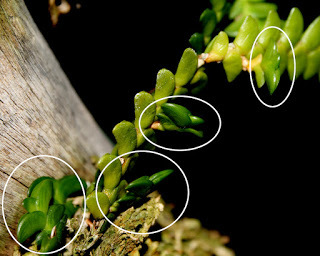 You shouldn't have to worry about watering the plant to much.  Try to keep the moss or potting material damp year round.  During the winter season, watering can be cut in half due to the plant's ability to hold moisture and nutrients in it's leaves.  If you see wrinkles appear on the leaves, increase your watering.

Fertilizer should be applied once every 7 - 10 days.  A systemic fungicide can be be used every 2 -3 months (I mean months).  The plant seems to be resilient towards most fungus and other diseases.  There will also be little if any pest problems.

Flowers will bloom year round on a mature plant.  Their size is about 1/2 inch (12mm) and are borne singularly from between each leaf.  The nectary or spur is about 3/8 inch (9 - 10mm) and usually sticks out straight behind the bloom.  The lip and the dorsal sepal are in opposite positions; where-as the lip becomes hood-like.  The flowers are fragrant (they say), I would suggest not to inhale to deeply trying to smell the fragrance.  You could possibly inhale the bloom itself and get it stuck in your nasal passages.  The blooms have a tendency to come off easy.

Angcm. distichum gets by very well in low light; even in a medium shade.  It does very well when sitting in a north facing window or on a table in an area that receives north light.  In areas with a much colder climate (an actual winter with snow), these window sills or tables are perfect.﻿