I have a two for one deal for everyone in this post.  Sort of like a bird in the hand is worth two in the bush.  Two different species that I'm going to discuss almost as one.  Angcm. didieri gets it's name from a gentleman (Alfred Grandidier) that collected it extensively in the mid to late 1800s while Angcm. elephantinum is rumored to gets it's name from the thick pedicel that connects the flower to the plant stem.  In some circles the size of the Angcm. elephantinum's flower compared to the size of the plant may have a play in it's name.  The flower can be just about the size of the plant itself. 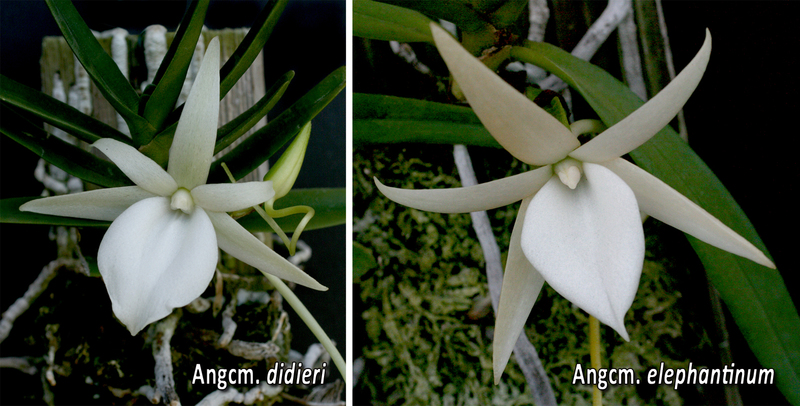 Both species can be found on the eastern side of Madagascar; although Angcm. didieri can also be found in Central Madagascar at up to almost 1,500 meters in forests with high humidity.  They are epiphytes that do very well mounted on either cork slabs or cedar planks.  During the warmer months in a sub-tropical condition, they should be watered every morning and will usually dry out in just a couple of hours.  If temps go up to and over 90, they should be misted in the mid to late afternoons.  They thrive on all of the moisture as they would in their natural environment.  When cooler temperatures prevail, it is best to back off the watering to everyother day and even every third or fourth day  if temps drop below 55 degrees.  When temperatures do reach the 55 degree mark, the plants should be protected against the cold.
In less than sub-tropical climates such as the northen states; both species will do well in a 4 inch pot with a medium to coarse medium such as charcoal, aliflor, a small amount of moss, tree fir and coconut pieces.  Watering should take place every 3 - 5 days during the late spring into very early fall.  The plants will do well outside during the warmer months but should be brought back in when night time temps start hitting the mid 50s.
Angcm. didieri will do very well in medium shade with a small amount of filtered bright light to very bright shade with a slight spackling of sunlight.  Angcm. elephantinum will do great in bright shade with a medium amount of direct spackling of sunlight.  It can accept a larger amount of brighter light than Angcm. didieri.
Both species are fertilized at the same time with the same mixtures every 4 weeks.  I use a systemic fungicide every 4 - 6 weeks; spraying the entire plant.
You can usually expect to see new root tips about ten months a year.  The new roots have a very bright silvery color to them and are warty in texture.   They do have a very short period of dormancy during the winter.
You should expect to see flowers starting in late March well into early November in the sub-tropical climates and the summer months in the northern parts of the country.
Angcm. didieri will produce kiekies at the basal part of the plant and will also put new plants out at the lower leaf axils after blooming.  You can see as many as 4 - 6 new plants after a first blooming period.  The height of the stem of a mature plant won't be much higher than 5 - 7 inches (13 - 18 cm).  Which makes it a compact spieces for smaller areas.  You will find 5 - 7 leaves on the stem and they are about 2 - 2 3/4 incshes (5 - 7 cm) long and about 3/8 of an inch (1 cm) wide.
Angcm. elephantinum will grow much the same way.  Although new plant growth is not as frequent while the new growth usually comes from the basal parts of the stem.  It will grow to be slightly higher the Angcm. didieri.  The stem will average a height of 6 inches (15.5 cm) but can grow as high as 9 inches (23 cm).  The leaves of Angcm. elephantinum are longer also.  They can reach a length of almost 5 inches (12 cm) and be 1/2 inch (1.3 cm) in width.