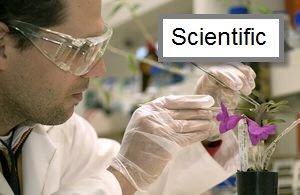 Scientifically speaking, orchids are part of the Plant Kingdom, coming under the Order Asparagales and are included in the family Orchidaceae. They are considered as one of the largest groups of flowering plants. Though, due to their uniqueness and having some of the most beautiful flowers in the world, we can safely put orchids on one side and rest of the plant kingdom on the other side.

Taxonomically for orchids, the field is still open for newer inputs. Earlier the morphology, sometimes phenology were the two aspects taken in consideration while classifying orchids, but now their genetic makeup has taken up preference over the other two. Their genetic mapping is being used to group them under various genuses. With each genus possessing unique features, different aspects of orchid study can almost be treated as separate subject.

Orchid ecology or morphology or phenology or even propagation have quite a wide scope for study. Orchids can be seen growing in almost every corner of the world, in every kind of habitat and under different climatic conditions.

Adapted to a wide range of habitats/environmental conditions, this family includes plants having variable morphology. Many epiphytic orchids have aerial roots, which apart from helping the orchid cling to the host tree perform other functions also. They possess a special thick and spongy tissue called velamen, which absorbs and stores water. Being green these also perform photosynthesis. Some orchids have thin mesh-like roots which in case of epiphytes hold rain water and debris such as dead leaves, animal droppings etc. The roots of terrestrial orchids are mostly fibrous, but in some orchids act as storage areas for food, forming rhizomes/pseudobulbs etc (Phaius tankervilleae). Though terrestrial orchids quite often do not need much reserve food material, as they get their needs fulfilled from the soil in which they are growing, unlike the epiphytes.

According to the type of stem growth, orchids are grouped into sympodials and monopodials. The first group is more primitive of the two. Sympodials have a creeping habit, where the terminal bud dies. The growth is then continued by the lateral bud, which sends out erect leaf bearing shoots. In the monopodials the terminal bud remains active, resulting in continuously growing stem, which has rooted internodes. Many of the monopodial orchids have swollen stems, called the pseudobulbs. Pseudobulbs mostly occur in epiphytic monopodials and serve as a reservoir of stored food material and water.

Orchids have different kinds of leaf adaptations. They may have annual or perennial leaves. In an orchid, the leaf structure is decided by the habit of the plant. They can be thick and fleshy or thin, corresponding to sunny or a shady habitat. Leaves of epiphytic orchids sometimes possess tiny hair like structures called trichomes or have lesser number of stomata as an adaptation for conservation of water.

The most interesting organ of the orchids is its flower. In orchid flowers, the sepals and petals are similar looking, so they are sometimes referred to as tepals. These are generally brightly coloured, and are present in sets of three. One tepal (petal) present on the lower side is modified to act as a support to the pollinating vector. It is referred to as labellum or lip, it is this unique feature which adds mystique to the orchid flowers. The anther and the stamen are fused together to form a single structure called the column.

There are many different ways to propagate orchids. You can multiply your orchids firstly by conventional seedling method (though it is the most difficult method of all!), secondly through separating pseudobulbs or pseudostems or kiekies or rhizomes and thirdly through tissue culture techniques.