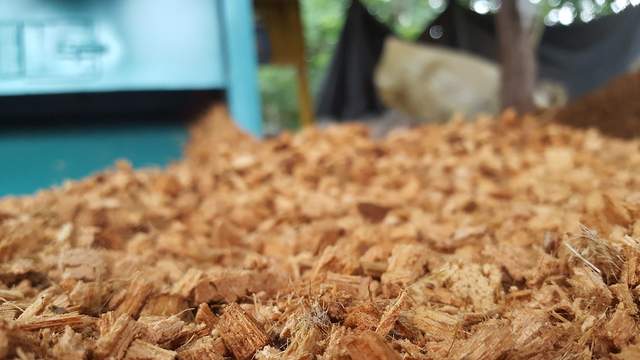 Posted by Alex Maximiano 3 months ago.

It seems extreme weather is here to stay. Last year we have an extended monsoon and now the winter seems to be going on and on. We will have to think ways to deal with such weather conditions. Plants will be requiring that extra care too. Last year, a large number of potted plants give up on the race of life when rains extended their stay. So we got to help our beauties combat such unpredictable conditions.

This is going to cost us more, money-wise as well as otherwise. To cut the extra cost you can try making a few things yourself. Cocopeat is one such item that can be prepared very easily at home. It is also called coir dust or pith. Cocopeat is used in the potting mix and has a good ability to hold water as well as air. It is available as blocks, disc etc. Commercially available cocopeat costs around 150 - 200/- ₹ in the Indian market and online the cost is anywhere from 80 - 350 /- ₹ However, the costs are much higher in the international markets.

Here is an easy method of preparing cocopeat:
Ingredients
The rough fibers, peeled off from the fibrous pulp of the coconut shell. Fibers a single coconut husk has two-thirds cocopeat while one -thirds are coco fibers. 1kgs of cocopeat can be obtained from 6-8 coconuts.

How to prepare
1. Collect sufficient coconut husk in a container by dehusking the coconuts.
2. Once that is done, place these on a sheet of newspaper or a large tray and start separating the fibers by pulling them apart.
3. You will notice that while separating some of the finer dust like material also separates. Do not throw this away, as this is cocopeat.
4. Now the separated fibers have to be cut into smaller pieces.
5. Grind these fibers in a grinder. Please take care to separate the softer fibers have from the hard rind-like skin, as it would be difficult to grind in a mixer-grinder and can also harm the blades of the grinder.
6. Remove the fibers that collect as fluff by sieving. What you get aftee this is cocopeat.
7. Place this cocopeat and that collected while separeting the fibers in a large container and wash it with water so as to remove the salts and other residues. Cocopeat can aslo be soaked in calcium nitrate because this will help balance the excess potassium and magnesium present in the cocopeat.
8. You can either use it directly for potting or you can leave it in sun for drying.

How to use
1. Break the lumps of cocopeat (especially if you are using commercially bought one).
2. Soak the cocopeat in water till it absorbs as much water as it can. It would take two hours and more for this to happen.
3. After properly soaking it, break the lumps still present.
4. Mix it with the potting soil evenly after squeezing out the extra water.
5. Fertilizer can also be added, though cocopeat is also rich in both macro as well as micronutrients like Nitrogen, potassium, phosphorus, magnesium, zinc etc.
6. Cocopeat can also be used as mulch around the orchid base on top of the potting mix.

Some facts about cocopeat
1. Cocopeat is biodegradable and can be re-wetted. However, the peat releases salts that can adversely effects if orchids are being grown in the hydroponic system. That is why the cocopeat has to be washed thoroughly before adding it to the potting mix.
2. It has naturally occurring rooting hormones.
3. Cocopeat has pH of 5.7 - 6.5 which is good for growth.
4. It contains a chemical called trichoderma, which not only promotes the growth of friendly bacteria and fungi in the potting mix; it also prevents the growth of harmful pathogens.

Cocopeat is fast replacing peat. Not only is it easily available, but it s a natural product that supplies a lot of nutrients to the orchid growing in it.